Charlie trained as an actor at Bath Spa University, and then went on to complete an MA in Performing Shakespeare.

Charlie is a versatile actor, performing in multiple accents, genres and styles, from conventional plays to immersive children’s theatre. In 2019, Charlie performed the role of Lysander in a slapstick version of A Midsummer Night’s Dream by the May Players. He also acted and one-handed puppeted in the role of McJingles in Eskimo Jo’s Believe: The Magic of Christmas, in 2021. He has also performed in some short films.

He has shown particular strength as a comedy performer. In 2021, Charlie toured Rock Bottom, a one-person show which he wrote and performed, to Fringe venues around the UK. The tour was a success, with many audience members engaging with the versatility of the tragicomic performance.

In 2022, Charlie will be performing Rock Bottom at Edinburgh Fringe, in The Vault at Paradise Green. He is also playing the role of Snowy in Milked by Simon Longman, as it tours small theatres. 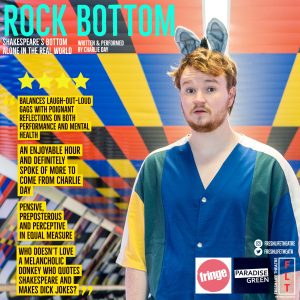