Linda started writing when she was 18 to put herself through university.

Her first published book was “Having it All” published by Bloomsbury Press in 1990. She was bowled over when it sold 20,000 copies.

In 1999 she sold her educational publishing and training companies in England, Ireland and France and took some time off. Reading Martin Gilbert’s biography of Churchill, she was shocked to find he stated there were no assassination attempts.

Her great uncle had told many tales before his death. He was ex-Inspector Walter Thompson of Special Branch. He spent 21 years with Churchill, night and day. Linda was bemused by the biography and went on a hunt to find Walter’s notebooks.

She discovered 700 pages of Walter’s writing in a little leather suitcase in the attic of a Somerset farmhouse.

In the notes there were clearly 13 times Churchill avoided death. Assassins, bombs, fanatics with knives and, of course Adolf Hitler. Linda joined with a documentary production company and wrote the middle 20 minutes of 13 episodes of the documentary series, “Churchill’s Bodyguard”, which was nominated for a BAFTA. She also ghost wrote the book that accompanied the series.

Since the documentary series could only cover hard facts and Linda felt there was a much bigger story to tell, she wrote the novel, “Churchill’s Shadow” in 2015. The book was launched at a charity dinner at the House of Lords and has sold around 10,000 copies. (Scotland Yard called all their bodyguards “shadows”.)

In 2020 she used some of Walter’s notes and a manuscript written by her aunt, Mary Shearburn, Churchill’s secretary to write 4 new books about their time with Winston.

Linda’s book, “Churchill’s Shadow” based on Walter’s memoirs is currently being written as a potential TV series covering little known events that happened behind the scenes during World War 2 involving Winston Churchill that just needs to be told …. 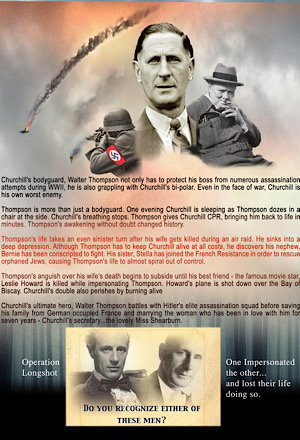